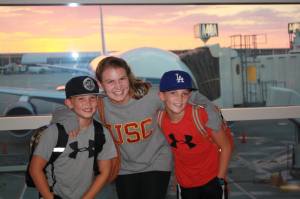 The boys had no home.

I recently sat next to twin brothers on a flight originating from the west coast.  Their names were Eli and Jonathan.  They had just turned 12 years old.

I could tell that they were nervous about the flight.  They confessed this to me as I attempted to settle into my aisle seat.  They also mentioned that they were traveling by themselves.

Over the next hour I learned that Eli and Jonathan were flying to see their dad.  They had not seen them in over 10 years- since they were mere infants.  They had lived in various places over the course of their lives.  Grandparents, uncles, cousins, their birth mother and other relatives had provided temporary homes.  They had moved around frequently.

They had seen their mother engage in some bad decisions, and it was clear that they worried about her ability to manage relationships.

Their dad had been a distant figure in their lives…an occasional phone call from across the country.  Eli reached in his backpack and produced an old photograph of the brothers with their parents- probably taken when the boys were about a year old.  It was a well-worn picture, but it was obvious that it was precious to those boys.  It was the reminder of happier days for their small family.

Their father had called earlier in the year to see if they would like to spend the summer with him.  He had found a good job and was in a stable situation for the first time in years.  Eager to see him- the boys jumped at the chance to travel across the country to see what might be in store.  Eli told me that they had been praying about it.

Eli and Jonathan had hope.  Hope that a better, more stable life was available seven states away.  Hope that their dad would somehow be the missing link to a normal life.

Rejoice in hope, be patient in tribulation, be constant in prayer.  Romans 12:12

Eli and Jonathan had seen more hardship in their twelve years than most of us have seen in a lifetime.  Despite the trials, they had hope for better days.  Hope in a father.

We can learn a lesson from these twins.  Despite the pain and hardship of this world, we have hope through a Father that will never leave or forsake us.

For God so loved the world, that he gave his only Son, that whoever believes in him should not perish but have eternal life.  John 3:16

For I know the plans I have for you, declares the Lord, plans for welfare and not for evil, to give you a future and a hope.  Jeremiah 29:11

I pray that Eli and Jonathan had a great summer.  I also pray that their dad can provide stability and a good home for them.  Most of all, I pray for their future…for today, tomorrow and next year.

Please pray for me in my role as a husband, father and son.  And please let me know how I may pray for you.

One thought on “Orphans on an airplane”